Sears Roebuck and Co. was responsible for some of the most outrageous and sought after bike designs from the 1930s to the 60s. The Bluebird, Robin, Blackhawk, Flightliner and Spaceliner were all Sears exclusives.

Sears used the Westfield Mfg. Co. and Murray of Ohio to manufacture their bikes. Sears bicycles sold before World War II were branded as Elgin and after World War II they were J.C. Higgins.

In the late 1950s, when tailfins and extra chrome were all the rage in automobile design, the Flightliner was launched and it became their best selling model. In 1963 Sears dropped the J. C. Higgins name and switched to their own brand name.

55 years after a young lady had received this space-age Flightliner for Christmas it was faithfully restored by Vic and made very ridable again.

At Vic’s Classic Bikes restorations begin at $175 for road bikes, plus parts. We would be glad to discuss your next restoration project. 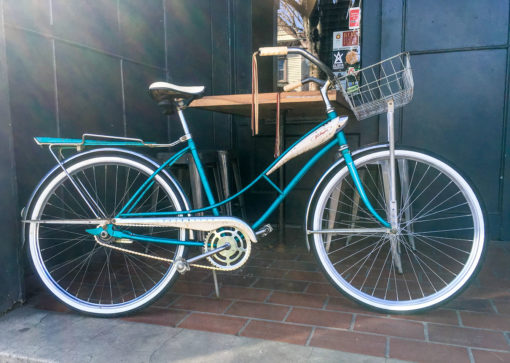